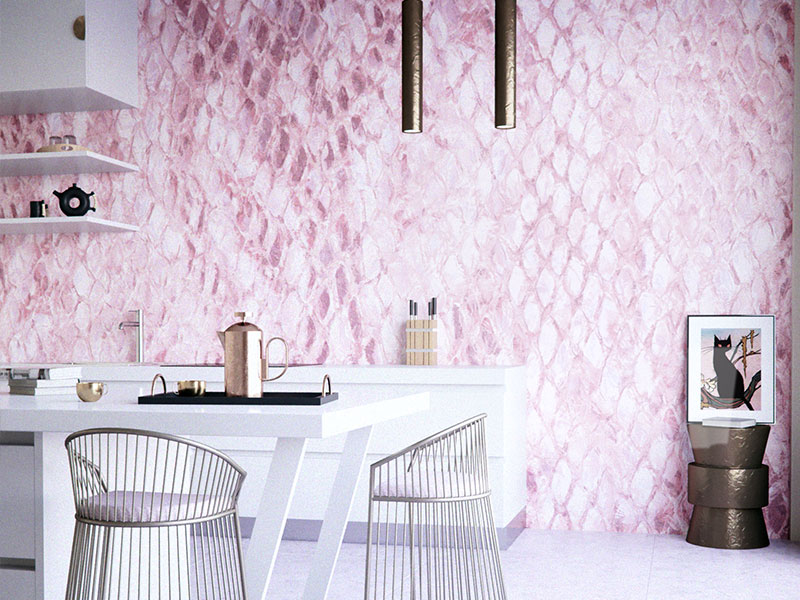 When choosing a unique design wallpaper, we must not forget that the wallpaper has a radical effect on the atmosphere of the whole room. When we put up wallpaper or change it in a room, it is not uncommon for our client to feel like they can take possession of a whole new space. It’s no coincidence that wallpaper can be a much bigger protagonist of interiors than most would think. Let's quickly look at a striking example!

As incredible as it may be, we see the same kitcchen in both pictures, and even more, from the same angle. It is not worth detailing that it is also very different in terms of mood. The first wallpaper that shines in pink is a design from the ANIMA collection named SKID.

Due to its color, a feminine atmosphere will be dominant in the kitchen. If we take a closer look at the texture, we can discover the pattern of snakeskin. The pattern fills the space with a truly exotic milieu, and we feel like we’re characters in an exciting wildlife novel, somewhere in the heart of the tropical rainforest.

So if we add the two main moods; the feminine or exotic atmosphere, we get something quite amazing. We try to formulate it, but the words will be few here, we need to feel the sight and the mood that SKID gives the room much more.

We still walk our imaginary tour in the same kitchen, however, in the background, a special wallpaper attracts attention that is far more pronounced than the one presented before. This wallpaper is GALLI from the LEÁLTA collection. Unlike SKID, instead of powdery shades, it uses strong colors, not a little dark, and GALLI is already much more figurative. An iconic statue greeted us from Rome, which empire once ruled the world. Heroic male figure is the defining character; it radiates strength, power, and last but not least, victory. The tender feminine character fades out here, and instead a more militant mood will dominate the room.

It is clear, then, that wallpapers can convey two different moods in the same space. It doesn't matter which wallpaper we choose for ourselves, because one of these wall creations can often reflect our individuality, mood and style.

As an example, SKID is an excellent wallpaper if you’re more introverted, crave tenderness and prefer a feminine room interior. In case you are bolder and like to radiate your definite character towards your surroundings, GALLI is definitely a winning choice.

But if none of you are, you can still choose from over a hundred of our wallpapers; and even if that wasn't satisfactory, our designers also design wallpaper on your own request. 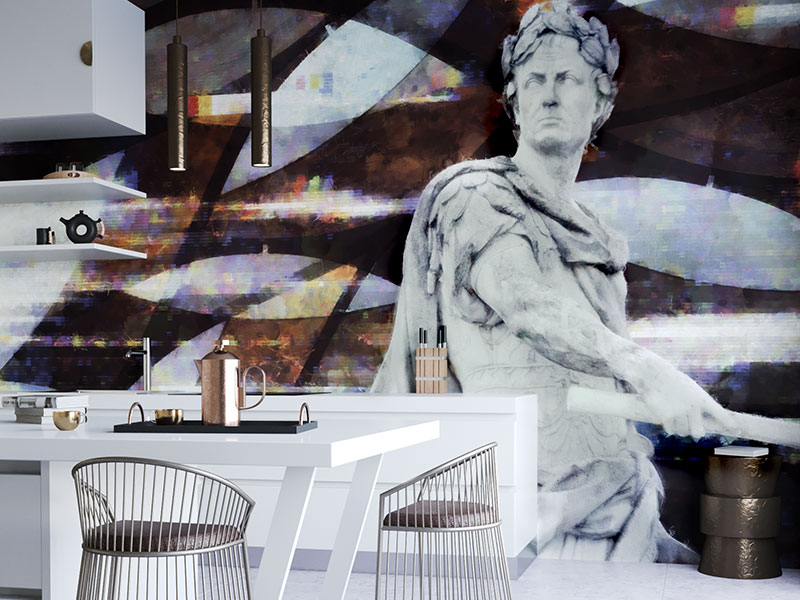